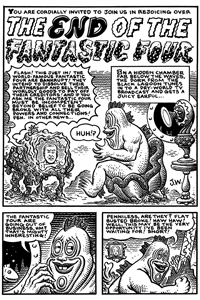 Jim Woodring is a cartoonist and illustrator probably best known for his series of critically acclaimed Frank books, as well as his self-published comic Jim and the construction of a seven-foot tall dip pen.

Jason is a long-time fan of Woodring’s work, and set to work trying to convince him to contribute to the Fantastic Four No. 9 Project. Woodring was apprehensive at first, never being a fan of superheroes, but Jason charmed him. And paid a lot of money. Jason’s insistence on having Woodring contribute to the project comes from seeing the similarities in the Kirby original of some of the furniture in Namor’s lair to various objects and designs in The Unifactor, the world in which Frank takes place.

Fun Fact: Of all the contributors to the Project, Jim Woodring is the only artist whose work appears on Jason’s body in the form of a tattoo (it is up to your imagination what and where).

Jim Woodring’s blog and website can be found here. 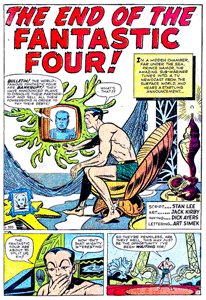